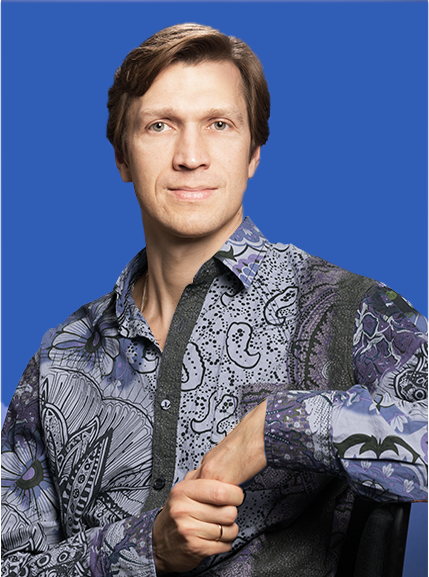 Stanislav Belyaevsky was born in Leningrad. At the age of ten, he was admitted to the famed Vaganova Academy. He studied intensively for nine years with the renowned ballet-master Vladilen Semenov. Under his tutelage, Stanislav made his debut in «Chopiniana» («La Sylphides») and Albrecht in «Giselle» while at the Vaganova Academy. He accompanied the Vaganova Academy in its international tours to the USA, France, Germany, Holland, Iceland, and Israel.

Upon graduating in 1991, he joined the ranks of the world-renowned Kirov Ballet (Mariinsky Theatre) as a company member. In his first season with the Kirov Ballet, he danced the lead of Albrecht in «Giselle». Further, he performed all the major roles in the company’s classical repertoire, including  Siegfried in «Swan Lake»,  Desire in «The Sleeping Beauty», the Prince in «Nutcracker», «Chopiniana»,  «Le Spectre de la Rose», Vaslav in «The Fountain of Bakhchisarai» and Colin in «La Fille Mal Gardee». Stanislav danced in Balanchine’s «Symphony in C» and in Boris Eifman’s «Cognition». He has partnered many of the world’s most renowned ballerinas, including Altynai Asylmuratova, Zhanna Ayupova, Yulia Makhalina, and Ulyana Lopatkina.

In 1994 Mr. Vinogradov cast Mr. Belyaevsky as the lead in the premiere of his new «Cinderella», partnering with the charming Zhanna Ayupova. He went on to dance many other signature roles choreographed by Mr. Vinogradov and has appeared in films about Kschessinskaya and about the ballet «Cinderella».

In 1997 Mr. Belyaevsky was invited to join the State Ballet Berlin. There he began working with such acclaimed balletmasters as Patrice Bart of the Paris Opera Ballet. David Saterland cast him as the young King Heinrich in his «The History of Pygmalion and Don Juan». During his time Stanislav performed many contemporary works. He worked with the renowned dancer and great teacher Oliver Matz.

In 2000, Mr. Belyaevsky was invited by Jorma Uotinen to join the Finnish National Ballet as a principal dancer. While there he was able to expand his roster of leading roles to include dancing Lensky in «Onegin» by J.Cranko, Oberon in «A Midsummer Night’s Dream» by H.Spoerli, Albrecht in S. Guillem’s «Giselle»,  Desire in R. Nureyev’s «Sleeping Beauty’», G. Balanchine’s «Violin Concerto» and «Serenade»,  Basil in «Don Quixote»,  and the Prince in B. Stevenson’s «Cinderella». He had the privilege of performing in «Raymonda» choreographed by Anna-Marie Holmes and Kevin McKenzie for the Finnish National Ballet.

In 2002 he was invited to dance the role of Siegfried in South Korea in Universal Ballet Company’s production of «Swan Lake». After an impressive performance, he went on to dance Romeo in the world premiere of O. Vinogradov’s «Romeo and Juliet» later in 2002.  Mr. Belyaevsky has also appeared as a guest artist with the Korean National Ballet and the International Ballet Star’s Gala in Seoul, Korea.

His creativity won him the «Pro Dance Award» in Finland.

Mr. Belyaevsky continued to expand his dance horizons by dancing in G. Balanchine’s ballet «Prodigal Son» as well as a challenging solo in H. Lander’s «Etudes», «Four Hands» by L. Berdo, G. Balanchine’s «Divertimento 15»,  «A Million Kisses to My Skin» by D. Dawson. Dramatical roles of Trigorin in J. Neumeier’s «The Seagull» and Vronsky in A. Ratmansky’s «Anna Karenina», the role of Tybalt in J. Cranko’s «Romeo and Julia» and role of Von Rothbart in Kenneth Greve’s staging of «Swan Lake» as well as many roles in K. Greve’s «Scheherazade».

While performing, Mr. Belyaevsky also graduated from the pedagogical faculty of the Vaganova Ballet Academy where he obtained a Bachelor of Arts degree in Ballet Pedagogy. He began teaching and coaching at the Finnish National Ballet School, at the Helsinki Dance Institute and at Canada’s Royal Winnipeg Ballet School. Mr. Belyaevsky worked with the Kirov Academy of Ballet of Washington DC as Assistant Artistic Director for the season 2017-2018. While working with these organizations, Mr. Belyaevsky trained many professional ballet students and enriched the repertoire of these professional ballet schools with ballets from the classical heritage.

Mr. Belyaevsky works as a guest choreographer and teacher at international ballet festivals in  Europe, Japan, Panama, Brazil, and many other countries. Both European and American International Ballet competitions invite Mr. Belyaevsky to be a member of their juries.

Mr. Belyaevsky has studied a unique dance notation method and become a professional choreographer and valuable expert who can set ballets from the Classical Heritage using the notations of dances from The Theatre Collection of Harvard University. One of the first performances was Marius Petipa’s 1900 ballet “Les Ruses D’Amour”, the choreography of which has been lost. Stanislav presented his choreographic version of this performance, based on the survived notations. The premiere took place on the stage of the Hermitage Theater in St. Petersburg (video of the premiere can be viewed on this website). 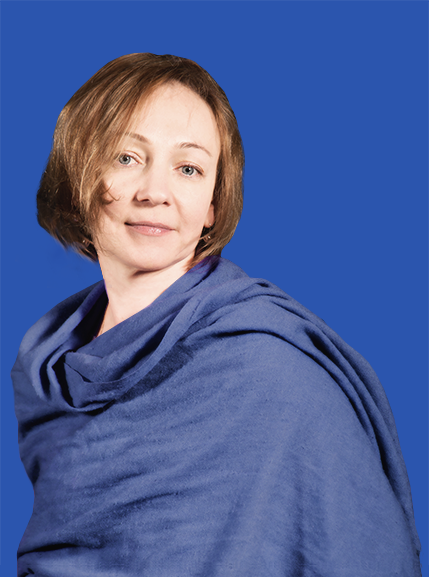 Anastasia Dunets was born in Leningrad. She received excellent choreographic training and education in the Vaganova Ballet Academy where she had the great fortune of studying under the tutelage of Natalia Dudinskaya and Konstantin Sergeev. She danced many featured roles under the guidance of Madame Dudinskaya, including the role of Summer in Sergeev’s ballet «Seasons», the pas de deux from «The Sleeping Beauty» and «Venetian Carnival» and the grand pas de deux from «Paquita» for the 250th-anniversary celebration of the Vaganova Ballet Academy in 1988. Anastasia also acted in several films about the Vaganova Ballet Academy and about Natalia Dudinskaya as well as in the film-ballet «Carnival». As a student, Ms. Dunets danced the role of Masha in «The Nutcracker» at the famed Mariinsky Theatre, with critics taking note of her superb technique and mature acting skills.

Upon graduation from the Academy, Ms. Dunets was awarded the 2nd place prize at the Vaganova International Ballet Competition. She joined the Mariinsky Ballet in September of 1988 where she worked with such acclaimed artists as Olga Moiseeva and Galina Kekisheva. As a member of the Mariinsky Ballet, Ms. Dunets toured internationally to Europe as well as the United States, Canada, Japan, Korea, Mexico, and other countries. Ms. Dunets worked under the guidance of artistic director and choreographer Oleg Vinogradov. In 1993 she acted in his film «Coppelia», and in 1994 she played the role of the Sister in his staging of «Cinderella». This role allowed her to demonstrate her fine comedic acting skills.

In May of 1997, Ms. Dunets accepted an invitation to dance for the State Ballet Berlin. This productive time period was full of premieres and creative work with new choreographers such as P. Bart, P. Lacotte, U. Sholts, M. Bolduin, and others.

Beginning in August of 2000, Ms. Dunets started dancing with the Finnish National Ballet, joining by invitation of its famed choreographer and director Jorma Uotinen. Here she danced leading roles in George Balanchine’s «Serenade» and «Violin concerto», the role of Gamzatti in Natalia Makarova’s staging of «La Bayadere», and Godmother fairy in Ben Stevenson’s «Cinderella», Mirtha in Sylvie Guillem’s «Giselle». She also performed a  leading role in Anna-Marie Holmes/Kevin McKenzie’s staging of «Raymonda», a unique collaboration between the Finnish National Ballet and American Ballet Theatre. In 2006 Anastasia receiving the PRO DANCE award for her role as Masha in John Neumeier’s «The Seagull». Two years later Ms.Dunets performed the great role of Arkadina in the same production and role of  Mother in the «Blood Wedding» (choreographer Cathy Marston), both roles requiring formidable acting skills.

During her performing career, Ms.Dunets received a Bachelor degree in Arts in Ballet Pedagogic in the Vaganova Ballet Academy. She began teaching at the Dance Institute of Helsinki and the Finnish National Ballet School.  2015-2019 at the Canada’s Royal Winnipeg Ballet School in Canada, and at the Kirov Academy of Ballet of Washington, DC, USA. Her students are awardees of many international ballet competitions and are dancing with such famous companies as John Neumeier’s Hamburg Ballet, Finnish National Ballet,  Boston Ballet, American Ballet Theatre, Atlanta Ballet,  The Washington Ballet, and Canada’s Royal Winnipeg Ballet.

In 2015 Anastasia was awarded Order of Lion of Finland for achievements in the Field of Art.

As a professional choreographer, she worked as an Artistic Director for the choreographic projects in Finland, USA, Costa Rica, and Bulgaria. Ms. Dunets is an honorary guest teacher at International Dance Programs and a jury member at international ballet competitions in Europe.