At the end of the nineteenth century, the dancer Vladimir Stepanov developed his method of documenting choreography, which encodes each dance movement like a musical sign. Later it was detailed in his book «L’Alphabet des Mouvements du Corps Humain», published in Paris in 1892. Stepanov breaks complex movements down to elementary moves made by individual body parts, enciphering these basic moves as notes.

In 1893 Stepanov proposed a project to the ruling committee of the St. Petersburg Imperial Ballet and the Imperial Ballet School, that would record the choreography of the company’s repertory for posterity. The committee (Marius Petipa, Lev Ivanov, Ekaterina Vazem, Pavel Gerdt, and Christian Johansson) required that Stepanov first present demonstrations, known as «certifications», of the effectiveness of his method before the project would be fully implemented with state funding. The first of these demonstrations was the notation of the one-act ballet «The Magic Flute», a work originally produced in 1893 by Lev Ivanov and the composer Riccardo Drigo for the students of the Imperial Ballet School. Stepanov then presented the next demonstration of his method by mounting a reconstruction of Jules Perrot’s one-act ballet «Le Rêve du peintre», originally staged in 1848 to the music of Cesare Pugni. The notations for this work were created by Stepanov after consulting Christian Johansson, who participated in the 1848 production and many performances thereafter. The reconstruction of «Le Rêve du peintre» was performed by students of the Imperial Ballet School on 23 April 1893. Based on the success of these notations, Stepanov’s project was approved and he soon began to notate the repertory of the Imperial Ballet. Among the first pieces to be documented was Petipa’s 1894 ballet «The Awakening of Flora» and the scene «Le jardin animé» from the ballet «Le Corsaire». Stepanov’s method of notation was also included for a time as part of the curriculum of students of the Imperial Ballet School.

After Stepanov died in 1896, the dancer Alexander Gorsky took over the notation project and perfected Stepanov’s system. Gorsky prepared «Table of Signs» in Stepanov notation. This publication was a slightly enhanced version of Stepanov’s original work.

After Gorsky departed St. Petersburg in 1900 to take up the post of Ballet Master to the Bolshoi Theatre of Moscow, the former dancer of the Imperial Theatres Nicholai Sergeev took over the project as a supervisor. By 1903 Sergeev was appointed régisseur of the Imperial Ballet. Sergeev and his assistants, all of whom were dancers with the imperial ballet (A.Chekrygin, V.Rakhmanov, N.Kremnev, S. Ponomaryev), created the majority of the notation. At the same time, the notations were created by students of the Imperial Ballet School. 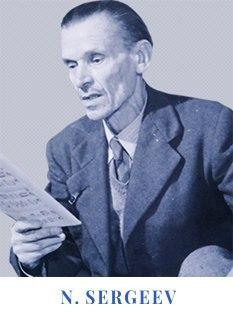 After the Russian Revolution of 1917, Sergeev was among those who fled to the west. He escaped in 1918 with a great number of the notated choreographies, music scores, and other documents. With the aid of the notations, Sergeyev restaged various ballets all over Europe.

When Sergeev died in 1951 the notations passed on for a brief time to his associate, from whom Mona Inglesby purchased them, continuing to stage his productions until 1953. Inglesby, through the London theatrical dealer Ifan Kyrle Fletcher, sold the Petipa «Swan Lake» notation to Harvard University in 1967, followed by the rest of the notations in 1969.

Today the collection is known officially as the «Nikolai Sergeev Dance Notations and Music Scores for Ballets» and contains the choreographic notation scores, music, designs for décor and costumes, theatre programs, photos, and other materials for over 24 ballets and 24 operas from the Imperial Ballet repertoire.

For some time the notations were useless, as no one in the world had any knowledge of how to read Stepanov’s method. Nowadays notations utilized by historians and some choreographers to stage new productions of Petipa’s era.